Bubble sorting is one of the simplest sorting algorithm that we can use to sort an array or a structure. Though it is so simple to implement in a C program, bubble sort is also considered as an inefficient sorting algorithm. Bubble sort comes handy in cases where the total number of elements to be sorted is so small (may be in the 100’s range). When the data size is large/huge bubble sort is seldom used in practical programming world. Let’s analyse bubble sort algorithm in detail by implementing it as a C program.

Note:– Since the algorithm is implemented with the help of 2 FOR loops only, it can be used as such for any programming languages like C/C++ or Java

The working of Bubble sort:-

Consider an array of 5 elements in the order 5 , 4 , 3 , 2 , 1. We need to sort this list in ascending order using bubble sort. The concept of bubble sort algorithm is simple, we can explain it in 2 steps.

For the simplicity of explanation, I am going to consider sorting in ascending order.

So this 2 step algorithm can be implemented in C language by using 2 for loops. Just see below:-

You may refer the 2 images given below for a better understanding of bubble sorting algorithm. The images are drawings of the work flows of the 2 For loops written in the above code snippet. 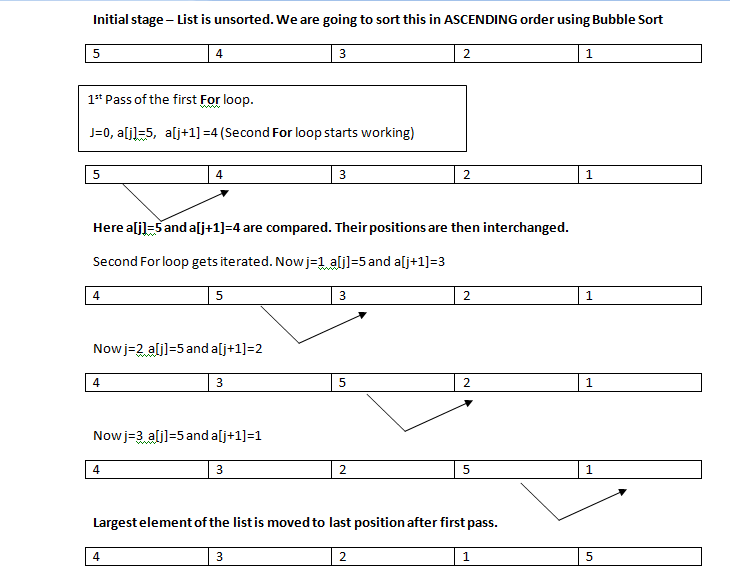 Now you can easily find the efficiency of “Bubble Sort” algorithm. If there are ‘n’ elements, it is of the order of n*n. This is simply because it takes nearly n comparisons to be made n times.

I recommend you analyse the two steps (step 1 and step 2) and the two images carefully. Now you can observe one fact. The number of comparisons to be made can be reduced by 1 after each pass of the first FOR loop. In the above example to sort in ascending order, the largest number 5 gets to the last position after first pass. It”s a fixed position and we are sure there is no number greater than 5 in this list. Thus we can reduce the number of comparisons to be made in next pass by 1. Similarly after the second pass, the second largest number (4) gets fixed in second last position (just before 5). Thus we can reduce the number of comparison again by 1 in next pass.  This modification improves the speed of bubble sort. The modified code snippet is given below.

With this new modified code, we can improve the speed of bubble sort.

The best case and worst case scenarios of Bubble sort:-

The best case is when the algorithm gives its maximum efficiency (and fast performance) where as the worst case is when it gives the least efficiency (slowest performance). In the case of Bubble sort, the best case is when the array to be sorted is in the perfect order(in the sorted order). Example:- Take the case of an array in the following order 1 , 2, 3, 4, 5 and we need to sort it in ascending order. In this case the array is already sorted!  So when implementing this with bubble sort, the sorting algorithm only makes comparisons. There is no interchange of elements happening any time while the algorithm works. Thus bubble sort performs in its maximum efficiency and requires only minimum time. The worst case of bubble sort is when we need to sort an array arranged in descending order to be sorted in ascending order or vice versa. Consider the case of an array in order 5, 4, 3, 2, 1 and we need to use bubble sort to sort this array in ascending order. In this case the algorithm makes maximum number of comparisons along with maximum number of element exchanges. Hence the algorithm gives its worst performance (takes maximum time)

Improving the algorithms performance in C

Many cases/scenarios can occur when we analyse a sorting algorithm. Just like the best case and worst case scenarios. In best case scenario of sorting an array 1, 2, 3, 4, 5  we have seen that there is “no exchange of elements” happening any time (through out the working of algorithm). Now consider another scenario of sorting an array of order 1, 2, 3, 5, 4; Here only the last 2 elements are not in order, where as the first 3 elements are in order. According to bubble sort algorithm, the largest element will occupy last position after completing first pass of loop. That means, after the first pass, the array will become 1, 2, 3, 4, 5 – and it gets sorted. So in this case the remaining 4 passes made by first FOR loop is a waste of time. After the first pass, only comparison of elements will take place and there will be no “exchange of elements”.

From this analysis, we can arrive at a conclusion. If a particular pass (say 3rd pass) of loop resulted in “no exchange of elements” through out that particular pass, then we can assume that, the array is already sorted. Thus we can skip the rest of passes through loop by giving a break statement or using a flag. By doing this we are saving a lot of time that might have got lost in unnecessary looping. This modification can be implemented using the following code snippet.

Hope you have understood the “bubble sort” algorithm well enough. If you have any doubts, please ask in comments section.