Hi everyone, We are introducing a new author to CircuitsToday 🙂 Well, here meet Anish.K, a student in engineering from Anna University. He will cover topics on Embedded systems and Robotics mainly. You can read about Anish on his bio page. Anish will publish his articles every Tuesday. So stay tuned for your Tuesday column every week.

Hai, this article pictures the very basics of embedded system for a beginner.

Embedded System – What is it?

“Parts” of an embedded system?

Mainly, the hardware components constitute power source, microcontroller/microprocessor, timers, memory, and whatever needed for running the specific task. And the software components constitute programs such as compilers, integrated development environments (IDE), assemblers, simulators etc., which are used to create codes that “instruct” the hardware to do the assigned job in an efficient manner.

Notable computer languages that are used for programming in embedded systems are embedded C, embedded C++, embedded JAVA and assembly. Here embedded C and others contain a specific library for a microcontroller to work. (Like the specific header files such as math.h, conio.h). Mostly, for simple applications, an assembly is used, which produces more efficient, compact codes.

Microcontroller/microprocessor is analogous to the brain of the embedded system. It performs all the calculation and decision part of the process. You would be surprised to know that the only arithmetic operation the processor/controller is capable of doing is, addition! (and the modern computer too). Multiplication is repeated addition, subtraction is the addition of negative numbers and division is repeated addition of negative numbers.

War at the core – processor vs. controller:

Well, we have already written a good article pointing out the basic differences between a microprocessor and microcontroller. Have a go through for better understanding. 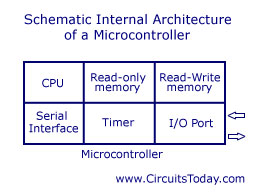 Many companies such as Integrated electronics, Microchip, Atmel, Philips, Hitachi manufactures microcontrollers. Most notable among them are, 8051 from Intel, PIC series from Microchip, AVR series from Atmel, 68HC11 and HD44780 LCD controller from Hitachi. The PIC controllers are mostly used by hobbyists.  Some examples of the embedded system worth mentioning are cell phones, air conditioner, car dashboard control, PMPs, robots, scientific calculators etc.

Embedded systems are used in a wide range of industries ranging from calculators to drones. Below are certain applications of embedded systems;

Embedded system integrated traffic lights can detect which directions have the highest density of traffic and change the traffic lights and their timings based on this info. This will be a great boon to cities that are controlled by fixed timer traffic lights.

A lot of instruments used in healthcare like blood pressure monitor, scanners, pacemakers etc works with the help of embedded systems.

Hardly anything used in advanced engineering is without embedded systems.

The applications of embedded systems in today’s world is in numerous. I think it is easier to give you a list of things that don’t use them.

What is Real Time Operating System (RTOS)- How it works?