With the help of researchers and biologists from the Harvard Medical School and Massachusetts General Hospital, the world’s first living laser has been developed. The laser, which emits a green light, has been obtained by coaxing single cells that includes special proteins that act as an optical amplifier. The figure below shows the microscopic image of a single cell living laser. 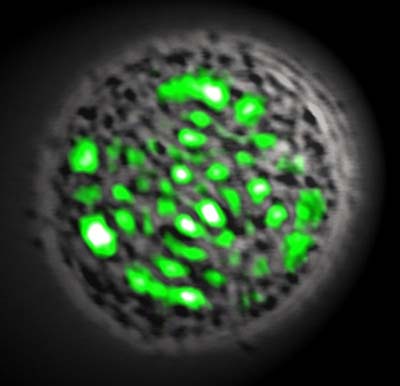 The protein is called GFP (Green Fluorescent Protein), and is said to have a distinct green glow. The GFP was first extracted from a jellyfish in the early 1960’s. After numerous researches on the protein, it was found that GFP was very useful in biomedical imaging, especially as a visual marker to trace the gene expression in living things. For their extensive studies about GFP, three pioneers were awarded the Nobel Prize as well in 2008. These studies have led to a much wider application of GFP in the field of bio-photonics. This led to the discovery about the living laser and also its information carrying capacity. The only problem is that after its discovery, its uses and applications have not yet been figured out. As it has paved way for a completely different and new concept, the applications are yet to be sorted out.

The GFP was inserted into a living cell that was taken from a human embryonic kidney cell line. In the experiment, another form of the GFP was used, called the enhanced GFP (eGFP). This material is a mutant version of the protein that can illuminate at a higher rate than the usual GFP in a jellyfish. The major advantage of this method is that the cell can easily outlive its stint as a part of the laser.

The studies were published by Malte C. Gather and Seok-Hyun Yun in the online publication called Nature Photonics. According to them, the experiment was conducted by keeping an eGFP bearing cell inside an optical shield and then hitting it with blue light pulses. At the beginning, the pulses will be very small and hence regular illumination is produced. At a certain threshold, there occurs a change in the optical output. The change can be noticed by the formation of a pure green, uniform light that becomes directive rather than diffusive.

During the early 1970’s researchers tried to tap the optical properties of ethyl alcohol to make lasers from alcohol products. But, since ethyl alcohol was a poor laser medium when compared to methyl alcohol, the idea was dropped out. It has been almost 50 years since the invention of the original laser. Since then, people have been trying to add different kinds of matter into coherent laser light. People even tried adding dye and then shined a pump light to obtain a laser light.

It is a completely different concept in adding a living cell as a medium for the laser light. This concept will surely revolutionize the photonics field, especially with the interesting fact that its applications are yet to be found out.

One of the possible applications that Seok-Hyun Yun and his colleagues have sorted out is the sensitive monitoring of intracellular processes.