The basic purpose of developing a C programming tutorial for this website – CircuitsToday – is to make it useful for people who wish to work with embedded systems. Really good C programming skill is an essential to work with embedded systems and “Pointers” is the most important concept in C that should be mastered by an embedded systems programmer. “Pointers” are so important because it enables a programmer to work directly with memory of the system. Memory of a system is organized as a sequence of byte sized locations (1 byte = 8 bits). If the total memory of the system is 128 bytes then there will be 128 accessible locations of 1 byte each. Each of these 128 locations are numbered from 0 to 127 in a special manner like 0000, 0001, 0002 …etc. The number associated with a byte is known as the address of the memory location. 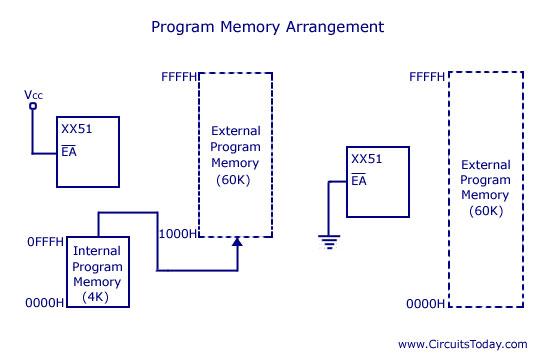 We can use variables to hold address of a memory location and such variables are known as pointer variables. We have seen before that normal variables are used to store data items of a particular data type (char, int, float etc). Before using a variable in a program, we declare it at the beginning. Similarly we need to declare a pointer variable too in a special way – to let the compiler know we have declared a variable as a pointer (not as a normal variable). To do this we have the * operator – known as indirection operator in C.

The syntax to declare a pointer variable is

Here we have declared a pointer variable of name ‘ptr’ and it is of type integer (int).

Why we need data types in pointers ?

The first doubt that may come to many is, why we need data types to declare a pointer variable. Well, here is the explanation. The address of a memory location will contain a data – rite? And it can be of type char, int, float etc. The difference between all these data types is in the size allocated to each data type. Char – is 1 byte where as int – is 2 byte and float is 4 bytes. Memory is allocated to all these data types as sequential blocks.

Note:- In fact we can actually declare a pointer variable without any data type using the keyword void. It is known as a void pointer. The topic of void pointer has to be explained separately – so I will explain it in my next post.

Assigning address to a pointer variable

To make use of a pointer and it’s capabilities – the address of a particular memory location must be assigned to the pointer. It is possible to assign address of single variable or that of an array or the address of a structure etc to a pointer variable. This capability makes pointers the most powerful tool in C programming. We can literally play with the memory of a system using pointers.

To assign address of an entity to a pointer variable – we use the & operator (address of operator). The operator & fetches the memory location of a variable.

So taking our earlier case as example:-

int a; // Declaring a normal variable 'a'

ptr=&a; // Assigning address of variable 'a' to pointer variable 'ptr'

Dereferencing a pointer (getting the real content from a memory location)

ptr=&a; // Assigning address of variable 'a' to pointer variable 'ptr'

printf("The value inside pointer is= %d",*ptr); // See the value is printed using *ptr;

The value inside pointer is= 10

So that is enough for an introduction to pointers. If you have any doubts – please comment here!