Our generation has seen all types of film cameras and digital cameras with which megapixel images could be taken. As a matter of fact, these images are still considered as the state of art in digital photography. But with the advancement in technology, Gigapixel images have started to show up, though in vivid detail. It is surprising to know that a Gigapixel image contains at least 1 billion pixels or picture elements.

The good thing with Gigapixel images is that they can be very useful in long distance photography and can capture even the minute details. Such an image, when taken from a satellite, kilometers away from the earth, can easily capture even the license plate of a car. Thus, they help the law enforcement and military with detailed reconnaissance and surveillance information.

The only problem is that these images can provide only a narrow view. So, the Defense Advanced Research Projects Agency (DARPA) has been researching in making Gigapixel cameras that can produce a true quality images in a single snapshot. Though a Gigapixel image contains a minimum of 1 billion pixels, the images are being pieced together from several megapixel-sized images to provide a high level of detail over a large area.

This can be done using a long-lens digital single-lens reflex (SLR) camera placed atop a motorized mount.

Take a look at the special lens that is used for taking such images. 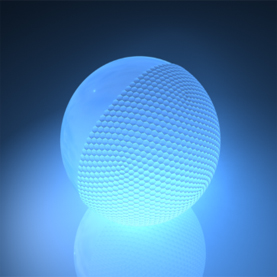 A software has to be developed to move the camera. With the movement of the camera in smallest angles, a mosaic of hundreds or even thousands of images are captured and are placed together to develop a single, high-resolution scene. Such an image can maintain its clarity even if the viewer zooms in on a specific area.