LC oscillator is a type of oscillator where a LC (inductor-capacitor) tank circuit is used for giving the required positive feedback for sustaining the oscillations. The LC tank circuit is also termed as LC resonant circuit or LC tuned circuit. According to the Barkhausen criterion for sustained oscillations, a circuit will sustain stable oscillations only for frequencies at which the loop gain of the system is equal to or greater than 1 and the phase shift between input and output is 0 or an integral multiple of  2π. LC oscillators can realized using BJT, FET, MOSFET, opamp etc. Typical applications of LC oscillators include RF signal generators, frequency mixers, tuners, sine wave generators, RF modulators etc. Before going into the LC oscillators in detail let’s have a look at the LC tank circuit. 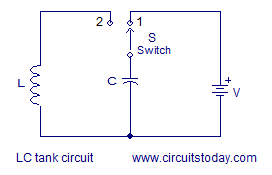 Though the original tank circuit means a capacitor and inductor connected in parallel, the switch and a voltage source are included in the circuit for the ease of explanation. Initially the switch S is assumed to be in position 1. The cacpacitor will be charged to a voltage V which is the voltage source. Assume the switch is moved to position 2 as shown in the figure below. If  an  ideal capacitor and inductor are used, these oscillation will sustain until the end of time. But in  practical case  the inductor will have some ohmic resistance and the capacitor will have some amount of leakage. These imperfections will waste some amount of energy in between the cycles  resulting in the loss of amplitude step by step and eventually the oscillations will die out. This gradual decay in amplitude which tends to the death of an oscillation is called damping. The oscillations produced in a damped  LC tank circuit  will look like what shown in the figure below.

In a practical LC oscillator, in addition to the Barkahusen criterion there must be some means to compensate for the energy lost in the tank circuit. Application of active elements like BJT, FET, opamp etc in the LC oscillator  is a way for meeting all these requirements. The active element in an LC oscillator circuit has three essential jobs.