To get a better understanding of operational amplifiers click here:- Operational Amplifiers (Op-amp)

A comparator finds its importance in circuits where two voltage signals are to be compared and to be distinguished on which is stronger. A comparator is also an important circuit in the design of non-sinusoidal waveform generators as relaxation oscillators.

In an op-amp with an open loop configuration with a differential or single input signal has a value greater than 0, the high gain which goes to infinity drives the output of the op-amp into saturation. Thus, an op-amp operating in open loop configuration will have an output that goes to positive saturation or negative saturation level or switch between positive and negative saturation levels and thus clips the output above these levels. This principle is used in a comparator circuit with two inputs and an output. The 2 inputs, out of which one is  a reference voltage (Vref) is compared with each other. 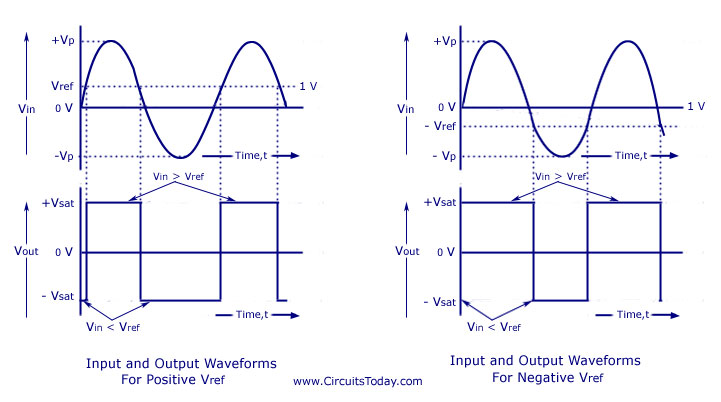 An inverting 741 IC op-amp comparator circuit is shown in the figure below. It is called a inverting comparator circuit as the sinusoidal input signal Vin is applied to the inverting terminal. The fixed reference voltage Vref is give to the non-inverting terminal (+) of the op-amp. A potentiometer is used as a voltage divider circuit to obtain the reference voltage in the non-inverting input terminal. Bothe ends of the POT are connected to the dc supply voltage +VCC and -VEE. The wiper is connected to the non-inverting input terminal. When the wiper is rotated to a value near +VCC, Vref becomes more positive, and when the wiper is rotated towards -VEE, the value of Vref becomes more negative. The waveforms are shown below. 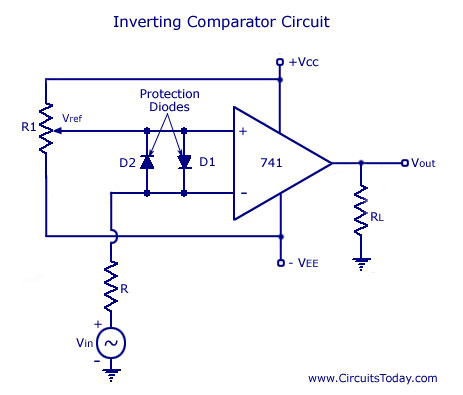 1. Operation Speed – According to change of conditions in the input, a comparator circuit switches at a good speed beween the saturation levels and the response is instantaneous.

2. Accuracy – Accuracy of the comparator circuit causes the following characteristics:-

(a) High Voltage Gain – The comparator circuit is said to have a high voltage gain characteristic that results in the requirement of smaller hysteresis voltage. As a result the comparator output voltage switches between the upper and lower saturation levels.

(b) High Common Mode Rejection Ratio (CMRR) – The common mode input voltage parameters such a noise is rejcted with the help of a high CMRR.