How cool will it be to have an intelligent ceiling fan that will auto-adjust its speed to your comfort!

That’s what we are trying to achieve here.

As you know, we need some input to control the speed of the fan. Here temperature is considered as a measure of comfort, the less the temperature the more the comfort is.

Here two thermistors are used to measure the room temperature. This change is reflected on the fan speed by regulating the current to the fan’s motor.

Description.
This fan regulator circuit will automatically control the speed of your fan according to the temperature. Two thermistors (R1 and R2) are used to sense the temperature. The circuit works almost like the published here previously.

As a result, the speed of the ceiling fan increases with an increase in temperature and vice versa. 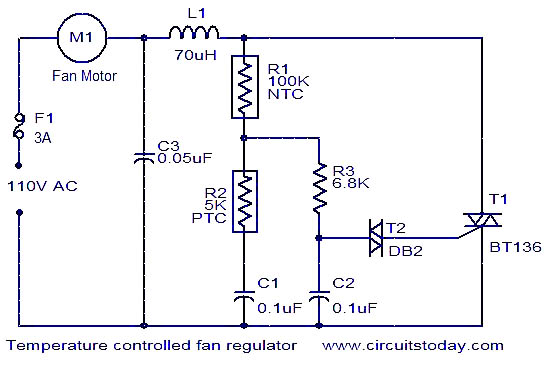