RC phase shift network is a simple resistor capacitor network that can be used to give a desired phase shift to a signal. The circuit diagram of a simple single stage RC network is shown in the figure below. 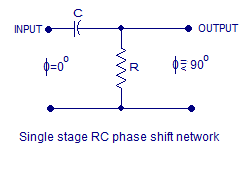 Theoretically in a simple RC circuit , the output voltage will lead the input voltage by a phase angle  Φ =90°. Anyway in  practical case  the phase angle will be something below 90° just because it is impossible to get a purely ideal capacitor. Phase shift of  a practical RC network depends on the value of the capacitor, resistor and the operating frequency.

Let F be the operating frequency, R be the resistance and C be the capacitance. Then the capacitive reactance Xc to the frequency F can be given by the equation  Xc = 1 / (2πFC)

Connecting such a three stage RC phase shift network between the input and output of a common emitter transistor amplifier will result in a transistor based RC phase shift oscillator. The circuit diagram is shown below. In the circuit diagram resistor R1 and the resistor R (close to the base of Q1 in the diagram) gives a voltage divider bias to the transistor Q1. Resistor Rc limits the collector current while Re is meant for thermal stability. Ce is the emitter by-pass capacitor and Cout is the output DC decoupling capacitor. By using more than three RC phase shift stages (like 4 x 45°) the frequency stability of the oscillator can be further improved.  The frequency of the transistor RC phase shift oscillator oscillator can be expressed by the equation:

Where F is the frequency, R is the resistance, C is the capacitance and N is the number of RC phase shift stages. The RC pahse shift oscillator can be made variable by making the  resistors or capacitors variable. The common approach is to leave the resistors untouched the three capacitors are replaced by a  triple gang variable capacitor. 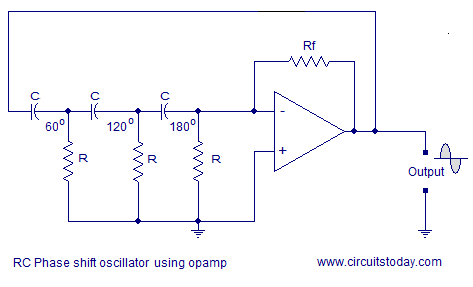