This article discusses various circuits that can be used to test a Transistor, both NPN and PNP. We have structured this article into two circuits. If you have any doubts about any section please ask through comments. 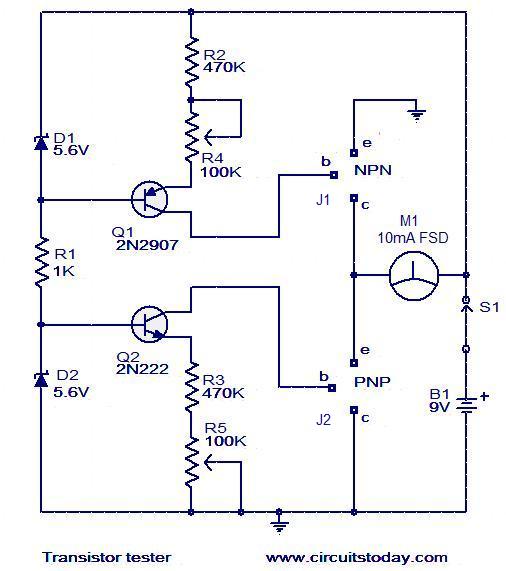 Note: This circuit is developed by our Author: Vysakh

The principle behind this circuit is very simple. This circuit basically works on the basis of transistor switching action (Basic Transistor Theory). Take a look at the circuit diagram given below. The PNP transistor is attached to the device with corresponding pin terminals and switch on the circuit. If, during one half cycle of the input AC (assume top terminal of transformer is negative and bottom is positive), the emitter base and collector base junctions of the transistor are forward biased. Then, in such a condition if there is a  and a current flow through the Diode D2 and the Green LED starts glowing, then understand that the transistor is in good working condition(the Diode D1 and Red LED is in reverse biased and not working at that time). During the next half cycle both diodes, and transistors are reverse biased and in OFF state. By the alternating property of input AC, we feel the Green LED is in ON state. We can check this circuit by providing various base currents (by very the variable resistor.

If the PNP transistor is in open state, it doesn’t conduct in both half cycles and no output is obtained. If the transistor is in a shorted condition, transistor acts as a closed path and both diodes are forward biased alternatively, thus making the two LED’s glow at the same time.

The PCB layout of Simple transistor tester also given below.