What are Triangular waves?

The main parts of this project are 1. A square wave generator 2. An integrator which converts square waves to triangular waves. The square wave generator is based on a uA741 opamp (IC1).  Resistor R1 and capacitor C1 determines the frequency of the square wave. Resistor R2 and R3 forms a voltage divider setup which feedbacks a fixed fraction of the output to the non-inverting input of the IC.

If the values of R2 and R3 are made equal, then the frequency of the square wave can be expressed using the following equation:

Next part of the triangular wave generator is the opamp integrator. Instead of using a simple passive RC integrator, an active integrator based on opamp is used here. The opamp IC used in this stage is also uA741 (IC2). Resistor R5 in conjunction with R4 sets the gain of the integrator and resistor R5 in conjunction with C2 sets the bandwidth. The square wave signal is applied to the inverting input of the opamp through the input resistor R4. The opamp integrator part of the circuit is shown in the figure below. 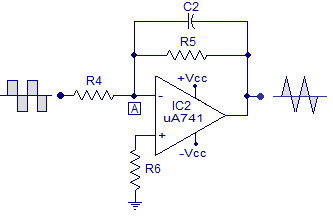 Let’s assume the positive side of the square wave is first applied to the integrator. By virtue capacitor C2 offers very low resistance to this sudden shoot in the input and C2 behaves something like a short circuit. The feedback resistor R5 connected in parallel to C2 can be put aside because R5 has almost zero resistance at the moment. A serious amount of current flows through the input resistor R4 and the capacitor C2 bypasses all these current. As a result the inverting input terminal (tagged A) of the opamp behaves like a virtual ground because all the current flowing into it is drained by the capacitor C2. The gain of the entire circuit  (Xc2/R4) will be very low and the entire voltage gain of the circuit will be close to the zero.

After this initial “kick”  the capacitor starts charging and it creates an opposition to the input current flowing through the input resistor R4. The negative feedback compels the opamp to produce a voltage at its out so that it maintains the virtual ground at the inverting input. Since the capacitor is charging its impedance Xc keeps increasing and the gain Xc2/R4 also keeps increasing. This results in a ramp at the output of the opamp that increases in a rate proportional to the RC time constant (T=R4C2) and this ramp increases in amplitude until the capacitor is fully charged.

When the input to the integrator (square wave) falls to the negative peak the capacitor quickly discharges through the input resistor R4 and starts charging in the opposite polarity. Now the conditions are reversed and the output of the opamp will be a ramp that is going to the negative side at a rate proportional to the R4R2 time constant. This cycle is repeated and the result will be a triangular waveform at the output of the opamp integrator.