What is Virtual Reality?

Virtual reality allows you to escape the real world by blocking out everything in your surroundings and creating a simulation of a new reality. By putting on the VR goggles, the user experiences the simulated reality first hand.

Virtual reality can be experienced by using Oculus Rift, Google Cardboard or Samsung Gear VR. By putting on your VR gear, you can instantly get transported into the era of dinosaurs or climb on top of mountains. Once you put your gear on, your immediate vision is blocked out. You will fully and completely get immersed into a new stimulated reality be it nature or fantasy.

A coding language known as Virtual Reality Modelling Language (VRML) is used to program images and graphics to allow the users to experience stimulated reality. VR technology stimulates the visual and auditory sensors of the users and it allows them to completely become absorbed in their new stimulating surroundings.

Different users have reported different experiences. Most people are completely blown by the experience. However, there are some, who have had problems such as nausea when they’ve tried to use Gear VR. This is mainly because our brains are quite smart and they may recognize discrepancies between our motions and the movement of the world around us. When that happens, our brain questions the reality of the world around us and causes us to feel nauseous. However, VR is still relatively new and it is continuously evolving. Undoubtedly, this problem won’t last for long as new technology emerges. 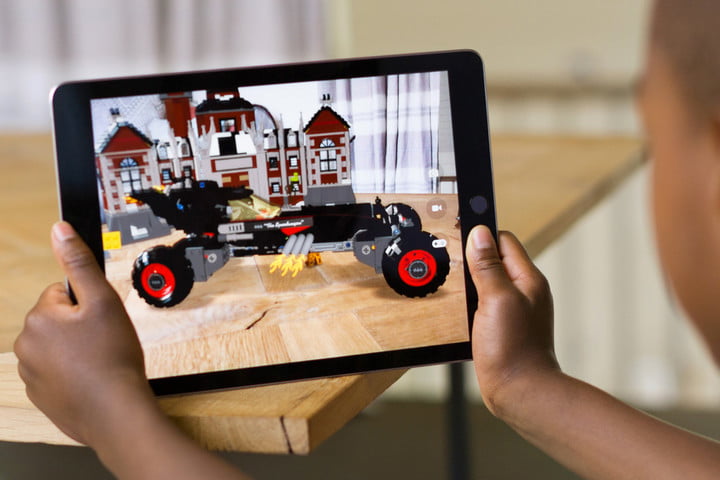 What is Augmented Reality?

Augmented reality enhances the current reality by adding computer-generated elements into it. It “augments” the reality and makes it more meaningful for the users by allowing real-time interaction. Augmented reality is often used on mobile phones via applications that have been programmed to process AR. These apps blend digital elements into the real world to provide more clarity. Many tech giants such as Facebook and Samsung have expressed interest in AR. We will surely be seeing lots of new developments in this field.

You can read more about Augmented reality here.

Virtual reality and augmented reality differ in terms of the “presence” of the user. In virtual reality, the user is transposed into a virtual world and disconnects with the world around him. Whereas augmented reality just alters the current reality for the user. It helps them add elements into their existing reality without altering their presence in any way. Many people use VR and AR synonymously, but that couldn’t be further from the truth.

To understand this concept consider the analogy of a jungle. By using VR, you are a part of the jungle as you explore all its secrets and navigate across the maze. In contrast, in AR you’re like an outside viewer seeing what happens in the jungle. You can even wear AR glasses, and see all the wild animals come to life in your own backyard.

Virtual reality is a powerful tool. While many people are aware of the exhilarating experience VR provides in gaming, not many know the potential VR holds in other areas.

VR has the power to change lives, there is no doubt about that. Following are 5 applications of VR In various fields:

Military training is both expensive and tough. It involves a variety of different scenarios that employees must be trained in that are both labour intensive and dangerous. By using VR, Military training can be conducted for different scenarios without additional costs. War simulations can be stimulated so soldiers can understand what it is really like in the heat of action. VR training are highly flexible, and thus they can be tailored for all kinds of divisions.

VR can be used to produce engaging simulations that appeal to the students and therefore it enhances their learning. Moreover, VR can allow students to explore situations and places that would not be accessible to them otherwise. For instance, students studying geography can actually visit different landscapes in VR and see all that they are studying. Tech giants are already investing in VR to enable more applications for it in education. For instance, Google has launched “Expedition” to enable more uses for VR in the classrooms.

VR can be used in organizations to train employees in real-world scenarios. VR can be used to deliver safety training, conflict resolution, and more. Wallmart is using VR to train their employees in handling different in-store crises such as holiday rush or aisle mess.

Medical students have to study for years before they’re ready for surgery, and even though they’re made to practice their cuts a lot before the actual surgery, practising on real patients is extremely risky. With VR medical students can practice many different types of surgeries without actually handling real patients. This helps boosts their confidence and gives them more insight into the surgical process.

VR is being used in Distraction therapy to distract the patients as they undergo physical therapy. A study In 2017 found that users undergoing VR distraction therapy during dental treatments reported lesser pain as compared to no VR.

This holds tremendous potential that can be explored in the medical industry.

Augmented Reality has been around long before virtual reality, and many of us have experienced it in one form or another. Following are applications of AR:

We’ve all heard about Pokemon GO, it had half the world going all over the place looking for Pokemons. Now that was possible due to AR. Pokemons that we had once only seen on our Gameboy devices were roaming all around us due to the power of AR.

‘Harry Potter: Wizards Unite’ is another popular AR games that is being launched just this year. AR has opened endless opportunities for gaming. What we previously saw only in science fiction is now coming to life with AR.

AR can be used to generate eye-catching and memorable marketing campaigns to increase their brand recall. A case in point is the marketing campaign by Pepsi back in 2014 when they placed an AR powered billboard on a bus stand. People on the bus stand could see all sorts of things happenings in their surrounding such as UFOs, wild tigers, octopuses grabbing people and more. This generated a lot of buzz for the company and generated more than 7.5 million views on their videos.
Similarly, to promote their new line of nail colours Maybelline ran AR print ads that allowed the users to virtually try the nail paints.

AR technology allows users to buy directly from magazines and catalogues. Argos tried this when they empowered their holiday catalogue with AR. Customers could use the Blippar’ app to blip the items that they like and shop directly from the catalogue. More than 21,000 users shared this campaign on social media.

AR is revolutionizing manufacturing. It is making it faster, easier and much more efficient. For instance, it would take the engineers of the fighter jet aircraft years of training to assemble an aircraft. Now thanks to AR technology and AR-enabled glasses engineers can see a rendering of nuts and bolts with instructions in real time. This makes their job significantly easier and increases their efficiency.

With AR, companies can also visually diagnose problems on their floor and reduce downtime.

With AR logistics become a whole lot easier. In traditional warehouses, products must be located, scanned, and loaded on the doc. Now AR technology is being tested to undertake this. DHL has already started testing how AR can help improve their logistics system.

To Sum it up, Both AR and VR are revolutionary technologies that have tremendous potential to change the world for the better. Their combined utility is even better. Investment is pouring into this area, and a lot of growth is expected in the future. The main difference between AR and VR lies in the perception of Presence of the individual. In VR, the user is blind to their surroundings and becomes completely immersed in the simulated reality. In contrast, AR exists within the real world. It is simulation layered over the real world. AR can be viewed by using AR glasses or mobile apps. For VR you need Oculus Rift or other gear that completely covers the vision of the users. Both AR and VR are powerful tools, and whether one is more powerful than the other depends upon the type of situation. Each comes with its own strengths and weaknesses.

Career options for electronics and communication engineers in India

Home Automation: What Is It and How It Works?