may also be classified as (i) wide-band and (ii) narrow band reject filters. This is also called a notch filter. It is commonly used for attenuation of a single frequency such as 60 Hz power line frequency hum. The most widely used notch filter is the twin-T network illustrated in fig. (a). This is a passive filter composed of two T-shaped networks. One T-network is made up of two resistors and a capacitor, while the other is made of two capacitors and a resistor.One drawback of above notch filter (pas­sive twin-T network) is that it has relatively low figure of merit Q. However, Q of the network can be increased significantly if it is used with the voltage follower, as illustrated in fig. (a). Here the output of the volt­age follower is supplied back to the junction of R/2 and 2 C. The frequency response of the active notch filter is shown in fig (b). 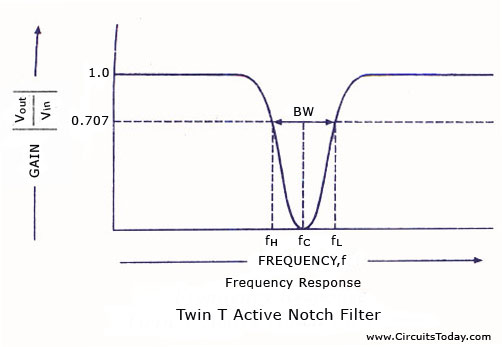 Notch filters are most commonly used in communications and biomedical instruments for eliminating the undesired frequencies.

A mathematical analysis of this circuit shows that it acts as a lead-lag circuit with a phase angle, shown in fig. (b). Again, there is a frequency fc at which the phase shift is equal to 0°. In fig. (c), the voltage gain is equal to 1 at low and high frequencies. In between, there is a frequency fc at which voltage gain drops to zero. Thus such a filter notches out, or blocks frequencies near fc. The frequency at which maximum attenuation occurs is called the notch-out frequency given by