In this article we explain how to do PWM (Pulse Width Modulation) control using arduino. If you are new to electronics, we have a detailed article explaining pulse width modulation. We have explained PWM in this tutorial using 2 examples which will help you learn how to control LED brightness using PWM and how to control DC motor speed using PWM.

PWM control is a very commonly used method for controlling the power across loads. This method is very easy to implement and has high efficiency. PWM signal is essentially a high frequency square wave ( typically greater than 1KHz). The duty cycle of this square wave is varied in order to vary the power supplied to the load. Duty cycle is usually stated in percentage and it can be expressed using the equation :  % Duty cycle = (TON/(TON + TOFF)) *100.  Where TON is the time for which the square wave is high and TOFF is the time for which the square wave is low.When duty cycle is increased the power dropped across the load increases and when duty cycle is reduced,  power across the load decreases. The block diagram of a typical PWM power controller scheme is shown below. 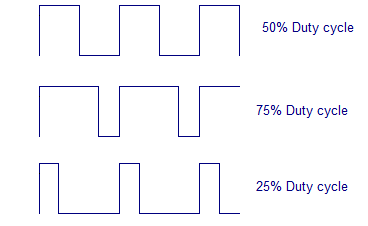 This one could be the simplest example of PWM control using arduino. Here the brightness of an LED can be controlled using a potentiometer. The circuit diagram is shown below. In the circuit, the slider of the 50K potentiometer is connected to analog input pin A0 of the arduino. The LED is connected at digital pin 12 of the arduino. R1 is a current limiting resistor. The working of the program is very simple. Arduino reads the voltage at the analog input pin A0 (slider of the POT). Necessary calculations are done using this reading and the duty cycle is adjusted according to it. The step-by-step working is noted in the program below.

The following example helps you to understand the stuff better.

Suppose the slider of the potentiometer is adjusted so that the voltage at its slider is 3V. Since the slider terminal is connected to  A0 pin, the voltage at A0 pin will be also 3V.  analogRead function in arduino   reads the voltage  (between  0 to 5V) at the analog input pin,converts it in to a digital value between 0 and 1023 and stores it in a variable.

Circuit diagram of DC motor speed control using arduino is shown in the figure below. The working principle and program of this circuit is same as that of the LED brightness control. Only difference is that and additional motor driver circuit using a transistor is included in the circuit. Each digital pin of the arduino can sink or source only 40mA. DC motors usually consume much more than this and it is not safe to directly connect a heavy load to the digital pin.

In the circuit diagram, slider of the potentiometer is connected to analog input pin A0 of arduino. Resistor R1 limits the base current of the transistor Q1. Motor is connected as collector load to the transistor. Capacitor C1 by-passes voltage spikes and noises produced by the motor. This filter capacitor is very essential and if it is not there the circuit may not work properly.