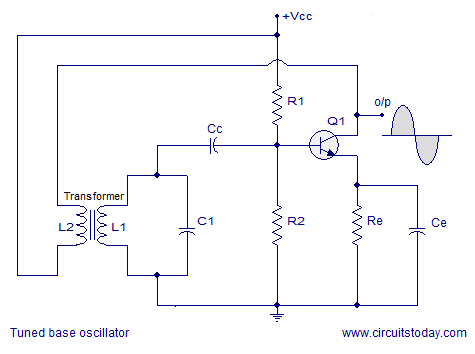 In the circuit diagram, resistors R1 and R2 forms  a voltage divider bias for the transistor Q1. Emitter resistor Re is meant for stabilizing the bias point. Ce is the emiiter by-pass capacitor. Its job is to by-pass the amplified AC signals from dropping across Re. If the amplified AC signals are dropped across Re, it will add to the base-emitter voltage (Vbe) of the transistor and affect the DC biasing conditions. Cc is a DC blocking capacitor. Its job is to prevent DC currents from the tank circuit side from entering the base. Primary coil (L1) of the transformer and the capacitor C1 forms the tank circuit.

Working of the tuned base oscillator.

These oscillations are coupled to the base the transistor through capacitor Cc and it appears in  amplified form across the collector of the same transistor. A portion of the collector voltage is inductively coupled to the tank circuit by the secondary coil L2 for compensating the losses in the tank circuit. The winding directions of L1 and L2 are so selected that there will be a phase difference of 180° in between. Thus the feedback system produces a phase shift of 180° and the transistor arranged in common emitter configuration provides another 180° phase shift. So the total phase shift between the input and output becomes 360° and the conditions for positive feedback and sustained oscillations are met.

Where F is the frequency of oscillations. L1 is the inductance of the primary of the transformer and C1 is the capacitance of the capacitor in the tank circuit.

Testing the tuned base oscillator circuit.