In this article, we explain the basics surrounding arduino. As the title indicates, this article is for absolute beginners in the world of electronics and for people who are beginning with arduino boards. What you can do with Arduino

“If you can imagine it, you can create it” – these lines best describes arduino. You can build any kind of interesting projects and applications using your arduino board. Let’s see some examples:-

1. A 4WD Robot with Remote Control – This is an interesting robotics project built using an arduino compatible board. The remote control in this project is created using the XBEE radio. You may see the video given in the project article to see how the robot operates.

2. GPS Cat Tracker – is another interesting project created using TinyDuino (another arduino compatible board). This project helps to track any moving object or living being using GPS.

There are hundreds of different projects that you can try with arduino. I have listed just 2 of them. In the coming days, we will be publishing many different projects based on Arduino. Subscribe to our Email Newsletter to receive exciting new projects in your email.

Arduino was originally designed for non technical people. In fact, the founders of Arduino designed it for creative people like visual artists, digital designers and the likes. It is very clear from the book written by one of the Arduino founder Massimo Banzi. If you read his book on Arduino – Getting Started with Arduino, you will find things explained at the simplest level possible using real world analogies any common man can understand. I will reproduce the main lines written by Massimo Banzi in Chapter 3 of his book – Getting started with Arduino.

“Arduino is composed of two major parts:the Arduino board, which is the piece of hardware you work on when you build your objects; and the arduino IDE, the piece of software you run on your computer. You use the IDE to create a sketch (a little computer program) that you upload to the arduino board. The sketch tells the board what to do.”

This is one of the simplest description given to an electronics prototyping board, and is easily understood by anyone. I will be coming up with a detailed article on Arduino hardware and software next – in which I will explain the board in detail. The photograph given below is the side view of Arduino Uno board made in Italy. 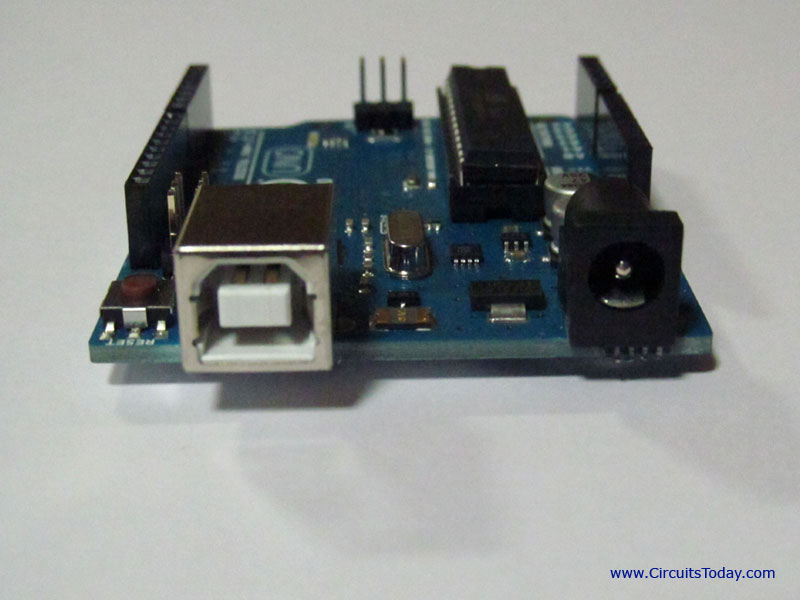 How to learn Arduino

There are hundreds of resources available to learn arduino and build exciting projects with it. If you prefer online resources, then the Official Arduino Guide can be a great starting point. You can find lots of interesting projects featured in the Official Arduino Blog as well. These two resources are more than enough to begin with Arduino. To go further and do advanced projects with Arduino, there are plenty of other online resources available like MakeZine, HackADay and more.

If you prefer an organised learning, then we recommend to buy books and learn using them. We have reviewed the best books to learn arduino and get good at it. We have reviewed those books in two articles – 1) books which helps to learn arduino basics and get started with it and 2) books which features arduino projects and build advanced projects and applications. You can check those reviews below and choose your preferred books.

1. Best Arduino Books for Beginners – here we have reviewed 3 good books on Arduino – which will help you to understand the basic concepts, arduino programming and do interesting projects.

2. Best Arduino Project Books – here we have reviewed books which feature various Arduino projects. These books explain different projects which can implemented with Arduino. They have provided with circuit diagrams and full source code of the projects along with the book.

How to Buy Arduino

Ardunio boards are available for purchase in many international online stores. If you are from USA, you can buy the board from Amazon or SparkFun. Similarly there are different online suppliers for Arduino boards in different countries. You have to keep in mind an important fact regarding arduino. Since arduino is an open source hardware, any one including me and you can make an arduino copmatible board and sell it commercially. There are many popular arduino compatible boards like NetDuino, FreeDuino, SeeDuino etc.  One easy way to differentiate between original arduino boards and the compatible models is to look for the trade name in the board. The name “Arduino” is trademarked and reserved for boards made from the original parent company in Italy. All compatible arduino boards use a different but look alike trade name like “Freeduino” or “Netduino”.

I hope this much information is enough to help you understand “what is arduino” and what you can do with it. I have covered the general aspects, what is the platform, where to learn and how to buy. In coming days, I will cover topics on installing arduino and we will be doing some interesting projects as well.